This vegan Hawaiian BBQ Pizza recipe with cashew parmesan is so delicious and satisfying. It's made with hearty black beans, pineapple, red onion, and an easy homemade vegan parmesan cheese with lots of flavor!

Have you tried cashew parmesan? It's so quick and easy to make, and a great healthier alternative to dairy cheese. (I'm convinced it's "magic dust"!)

You can sprinkle it on pizza, veggies, pasta, salads, sandwiches, wraps. There are so many versatile ways to enjoy it.

It's definitely elevated our homemade vegan pizzas to a whole other level.

For this recipe you will need:

Have leftover cashew parmesan? Store it in a sealed jar or container in the fridge. It keeps for a couple months!

Vegan cheese: Feel free to swap out the cashew parmesan for your own favorite cheese! Use dairy-free mozzarella shreds or a combination of mozzarella and cheddar.

Toppings: Use as much or as little of the toppings to suit your own taste. I'm a big fan of the pineapple-onion-cilantro combination.

For more inspiration, also browse all 30 minute or less recipes. 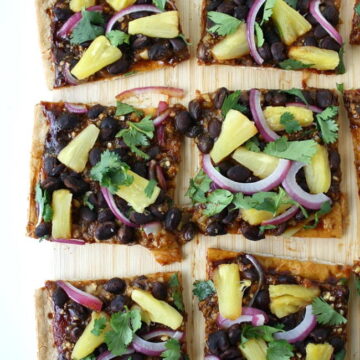 For the cashew parmesan:

*Cashew parmesan: You might have leftover parmesan depending on how much you use. It stores in a sealed jar or container in the fridge for a few months.

If you are enjoying this Vegan Hawaiian BBQ Pizza recipe, also feel free to check out: